One room that is actually fully automated now is our main bathroom. From a equipment point of view, there are two Fibaro dimmers (FGD211) and one Aeon 4in1 sensor (temp, humid, light, motion).

The nice looking box of the Fibaro unit: 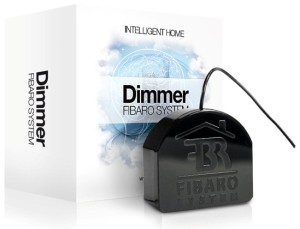 The Aeon 4in1 sensor: 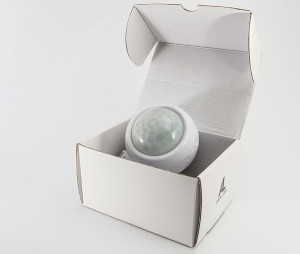 So – how is the automation done? Well, it has actually evolved to the state of today by passing different level of automation. From the beginning (directly after the units were installed), both the roof light and the lights in our commode were lit up as soon as the sensor detected motion. The techie nerd of myself thought that this was cool. The more intelligent wife of mine, had some good points regarding this mode. Example of some:

So, what is now done in order to address these problems?

Firstly, we are only lighting up the roof in the bathroom. If the need for more light comes up, the manual switch button needs to be pressed. Secondary (and the easiest) was of course to comment out the lines that enabled the lights during night hours.

So – how to handle the comments about ”don’t light up the lights if the room is bright enough”. Two options came to mind. Firstly, since I have the ”forecast-io.py” python script that sends weather information to openHAB via MQTT, there was an option to say ”sun rise at…” and ”sun set at …” and just ignore the enable commands during this time span. Secondly (and the one that I preferred) is of course to use the light sensor of the Aeon unit. So – when the light level in the room is over 100 Lux, then the light will not be enabled. This has actually worked very well so far 🙂

Another automation task that is implemented is the ”turn the lights off after X minutes of inactivity”. This can very well be the main reason for my investment in the automation system – as described in ”Home automation page”. So – the sensor is configured to send OFF after 10 minutes of inactivity (if it has not detected motion for 10 minutes). This setting was tried out and worked for ”normal toilet visits” 🙂 However, when taking a shower, the sensor did not react on presence/movements. Since I don’t have any plan to install a motion sensor in the shower, I had to solve this ”lights going out when taking a shower”-problem. Any idea? Of course – use the humidity sensor! So – now, when the humidity in the bathroom is more than 65% (have been trying some values here), the lights are not automatically turned off. If the rule triggered by the sensor (off) executes and the humidity is ”too high”, a timer starts that again (in 10 minutes) will check if the humidity is lower than the threshold value. If true, the lights go finally out! 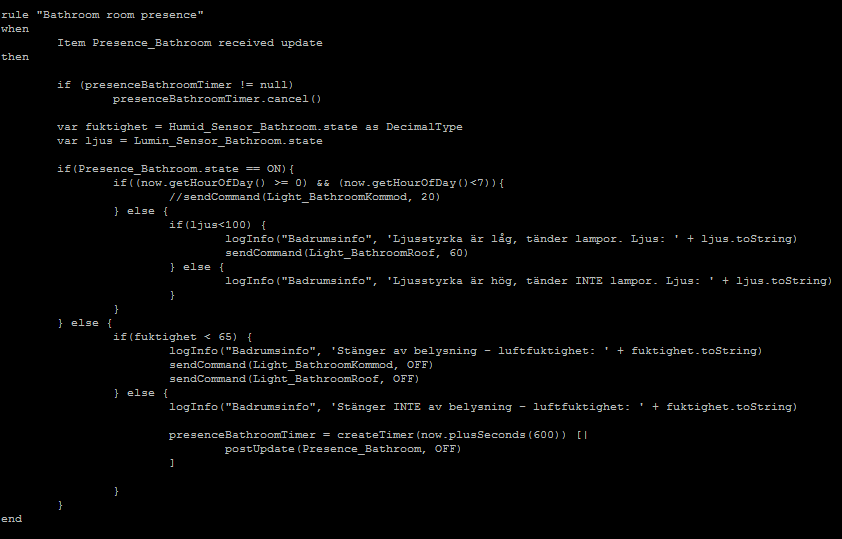 There is also some debug information printed out that also reaches my phone while debugging. Could look like this when light level in the room is to low and the lights are turned on:

And when the lights goes out, it could look like:

One thought on “Bathroom automation”