Now the system has been running in a semi lab/production environment for a while. The key feature that everything the automation system can or will be controlling must be controllable ”as usual” has actually worked out pretty well. The installation of Fibaro modules or sensors does of course mean that some lights are automatically switched on/off – but still, they can be controlled manually ”as before” also. This is a WAF must have feature 🙂

So – what’s up now? Well, you all saw the previous post about the LED list? That’s actually what happens right now. We are about to add the list in the bedroom. At first I only thought that the RGBW module from Fibaro should be used to control the LED, but as of today I bought two DS18B20 temperature sensors that I will try to connect to the module and have the values sent to openHAB.

Since the RGBW-controller is placed in the bedroom, these two sensors will be used for ”bedroom temperature” as well as ”outdoor temperature”. The later will be of most value of course. Thanks to the ”addon” HABmin it’s fairly easy to display graphs of how the sensors has been changed over time period X. This is an image showing the temperature from the bathroom where a AEON 4in1 sensor is installed. 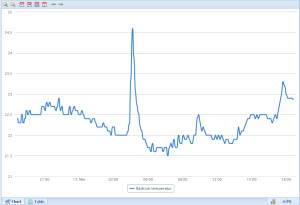 Of course the values are accessible in openHAB. Anyone can figure out when showering took place this morning? Yep – right, I was up awfully early!

Some other comments from the use of the system so far? Well, the alarm integration was absolutely worth the effort. Even though I have not developed the support to send commands over RS-232 to the PowerMax Complete module I still get all the events and statuses from the system into openHAB. That was actually another ”must have” or ”deal breaker” when decided to use openHAB instead of other more expensive ”not open sourced” systems. An alternative should of course be to add Z-wave nodes in parallell with all the alarm sensors, but what a waste!

Also, the automation adaption (or to automate a formerly manual controlled house) is not without problems. The absolutely trickiest part of the setup so far has been to decide when there is presence/activities in areas. For example, how long should the lights be kept on a normal evening? Before this system, I had a timer that switched all the Nexa units off at 11 pm. This is not very nice – and since the system now knows of the PIR statuses, IP check (via Network Health module) of the TV in the living room and magnetic contacts of the doors I have tried to adapt the system to be as smart as possible. So after a set time, the check starts and executes periodically in order to validate if there is presence or if we finally have gone to sleep and it’s safe to turn off all lights. And for all of you who now thinks ”why not just a goodnight-button” I can assure you that it exists – but it’s not called ”Automation” for nothing, is it!? 🙂 I have not had the guts to install the ”SendToSay”-solution where Google via it’s TTS could whish us a good night sleep…. 😉

The rule that checks for presence before shutting down lights looks like:

And as before, even though not mentioned in the post, all the state and commands are sent from openHAB on the MQTT bus in RabbitMQ – so actually available outside the OH as well. That i think is an important thing for further compatibility with other systems.

3 thoughts on “A mid time story”